Dogecoin is a cryptocurrency invented by software engineers Billy Markus and Jackson Palmer in December 2013. Markus and Palmer originally created Dogecoin, at least in part, as a lighthearted joke for crypto enthusiasts, taking it's name from a meme.

In true rags-to-riches style however, Dogecoin has exploded and has become one of the largest cryptocurrencies by market cap in the world! 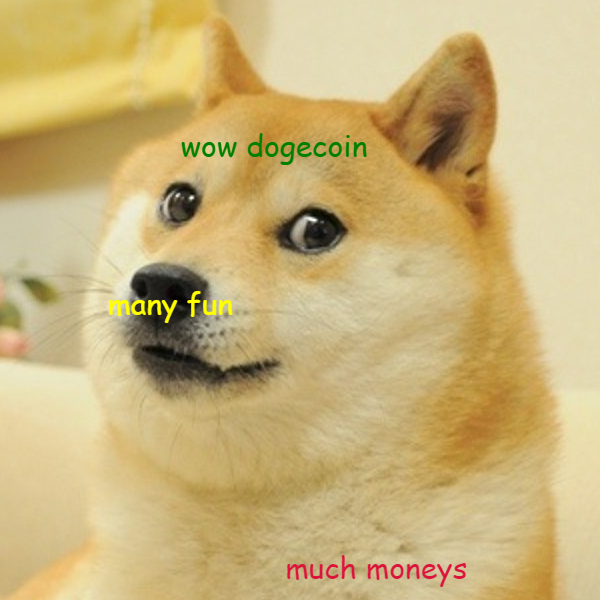 Palmer branded the Dogecoin name and logo as an homage to a meme popular in 2013 featuring the deliberately misspelled word "doge". According to Know your meme, the word Doge originated in 2010 when a Japanese kindergarten teacher posted photos of her Shiba Inu dog, Kabuso, to her blog.

How do you pronounce "Doge"?

What's with the weird phrases?

"Wow Dogecoin. Many fun. Much moneys."

Thanks to the Doge meme, internet users have created their own Doge "language".

Doge phrases can consist of either one or two words. Single-word phrases are usually the shortest possible form of a verb. "Amaze", "excite", and "scare" are common examples. "Wow", admittedly not a verb, is perhaps the most common single-word phrase, and appears in almost every Doge meme.

For the two-word phrases, the first word is almost always one of the following: "Much", "Many", "So", "Such", "Very". The second word must be something that makes the phrase itself grammatically incorrect e.g. Much moneys.

What's with the "To The Moon 🚀" references?

Dogecoin "hodlers" are holding their Dogecoin in a bid to take Dogecoin "to the moon". The reference itself goes back at least to March 25, 2014, when the Dogecoin community successfully raised 67.8 million Dogecoins (around $55,000 at the time) in an effort to sponsor NASCAR Sprint Cup Series driver Josh Wise. Wise drove a car nicknamed the "Moonrocket" featuring a Dogecoin/Reddit-sponsored paint scheme. Elon Musk has recently also tweeted he will literally put Doge on the Moon.

Should we worry that "Dogecoin has an unlimited supply"?

Dogecoin has a steady inflationary supply characteristic making it ideal for usage as a currency. Every year, 5 billion new coins are produced. Dogecoin supply inflation is currently at 3.87% - 5/129 (April 2021), however that percent decreases every year as the circulating supply increase by 5 billion. It is actually better to increase the supply by 3-5 percent per year to keep fees on transactions low. It is also good that new coins are being produced to account for lost keys and lost coins. All commonly used currencies have to be inflationary in order to be practical.

Have we forgotten something? Reach out to us and let us know.